PrEP Awareness Among People of Color

During my recent community health rotation, I was curious about understanding and identifying the factors behind why certain high-risk communities were hesitant to start PrEP. Some factors that I thought of included lack of knowledge about PrEP, decreased access to healthcare, and not trusting physicians. I came across an article (Ojikutu et al.) that addressed those factors and more. The article looked at socio-demographic characteristics and barriers to PrEP use among black individuals across the United States. There were 855 participants, of which 38.2% were identified as high risk based on the stratification criteria, and 54.5 % were female. What took me by surprise was that among all participants, only 14.5% were actually aware of PrEP.


The study found that only 35.1% of high-risk patients were willing to use PrEP. Furthermore, the most common reason for lack of willingness to use PrEP was low risk perception where 65.1% of the patients in the high-risk category believed that they were not at increased risk for getting HIV. Other common reasons included not believing that PrEP would actually work, and potential side effects of the medication.


Black individuals are disproportionately affected by HIV and as a result, increasing their awareness about their risk along with the benefits of primary prevention through methods like PrEP should be explained to them more thoroughly. While improving access may be more of a long-term goal in situations like this, trying new methods such as increasing pharmacy access and online purchasing may benefit these communities. Recently, California enacted legislation stating that high risk individuals who tested negative for HIV should be informed about PrEP during post-test counseling. Having these post-test counseling sessions nationwide will be crucial to increasing patients’ knowledge about PrEP and increasing their awareness of being high risk.


Another study (Roth et al) pointed out that as of 2016, Pennsylvania was ranked ninth in the number of new HIV diagnoses, with most cases occurring in Philadelphia, where there are a variety of cultural backgrounds leading to significant racial and ethnic disparities. Of the newly diagnosed cases, 56.2% was among women and 86.4% occurred Black and Latin people.  What they found was that the overall PrEP awareness was very low at 4.9% and lower among those who had seen a physician in the last 12 months than those who had not!  This was extremely discouraging because it indicates that people of color and women actively seeking care are still not being actively informed about PrEP and its benefits, especially the those who are at high risk for getting HIV due to their risky behaviors. The only variable that was associated with increased PrEP awareness was participation in an HIV prevention intervention (specifically with HIV prevention physicians).

All providers need to be cognizant of asking about their sexual practices and other activities that could potentially put patients at risk for contracting HIV. Physicians need to be comfortable asking these intimate questions because that’s how patients will understand how they’re putting themselves at risk, and it’s the most efficient way to educate patients about PrEP.  The disconnect between physicians and people of color is something that is creating a huge barrier to patients getting the care that they need so it is up to physicians to come up with a consistent method to ensure that every patient who may be at high risk is informed of primary prevention options, like PrEP.

Welcome and About Us

Welcome! The WHEP site is intended to be a site to get information; get answers and engage in our varied activities. Want to learn more about....? Want to hear about how to get involved? Want to know what others are doing? Want to get connected with us? Have ideas or suggestions? Whether related to lectures or sessions; seminar series or talks, community health screening or movie screenings, our goal is to make this useful site for keeping up with sex and gender issues in medicine. 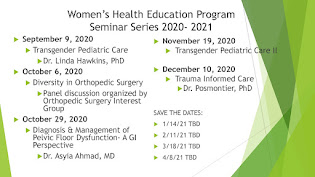