The intersection of women’s health and gastroenterology gives way to an interesting discussion of sexual, reproductive, and mental health. Most inflammatory bowel disease (IBD) is diagnosed between 15-26 years of age or later in life between 50-80 years.  The first peak of onset comes at a critical time for women’s sexual and reproductive health. For example, 1306 women with IBD enrolled in the Crohn’s and Colitis Foundation of America, were surveyed about vulvovaginal symptoms including vaginal itch, burn, discharge, dryness and pain (Ona et. al, 2017). Women with constant or frequently active IBD have increased odds for vaginal discomfort (OR 2.01, 95% CI 1.46, 2.78), vulvovaginal discomfort, decreased interest in sex for 55% of women, or ability to have sex in 47% of women surveyed (Ona et. al, 2017). From an early age, gastrointestinal health can significantly impact quality of life for many individuals.

There is a spectrum of considerations when it comes to discussion of IBD in pregnancy, specifically. A study conducted at Icahn School of Medicine at Mount Sinai found that mothers with IBD often have gut dysbiosis during pregnancy that is reflected in the offspring’s gut microbiome (Torres et. al, 2020). Specifically, they often have lower alpha diversity during the first and second trimester of pregnancy and different beta diversity during each trimester compared to mothers without IBD. Offspring of these mothers presented with reduced bacterial diversity that persisted from the first week of life through 3 months; this includes a reduction in Bifidobacterium which usually aids in maturation of the immune system and protection from colitis (Torres et. al, 2020). The infant microbiome profile varied with infant exposure to antibiotics, feeding and delivery method. Interestingly, Caesarean section and exposure to antibiotics during pregnancy and early life have been shown to increase the risk of IBD. On the other hand, breastfeeding is shown to be protective against IBD (Torres et. al, 2020). This data lends itself to investigating how to promote gut microbiome diversity in mothers with IBD and indirectly offspring.

Research shows that mothers with IBD are at a small but significantly increased risk of new-onset psychiatric diagnosis during the postpartum period — specifically mood/anxiety disorders and substance-related disorders — when compared to their non-IBD counterparts (Vigod et. al, 2019). Furthermore, mothers with Crohn’s are at higher risk than those with ulcerative colitis (Vigod et. al, 2019). This information is consistent with the American Gastroenterological Association’s ‘Inflammatory Bowel Disease in Pregnancy Clinical Care Pathway’ that calls for a multidisciplinary model to include MFM physicians, IBD specialized gastroenterologists, family planning and behavioral specialists who address the increased risk of psychiatric illness in mothers with IBD. This collaborative approach helps the expectant mother navigate IBD-specific items, including finding therapies safe in conception, pregnancy or lactation, as well as the higher risk of miscarriage, small-for-gestational-age infant, premature delivery, poor maternal weight gain, and complications of labor and delivery in IBD.

Posted by Judith Wolf at 3:45 PM No comments:

Welcome and About Us

Welcome! The WHEP site is intended to be a site to get information; get answers and engage in our varied activities. Want to learn more about....? Want to hear about how to get involved? Want to know what others are doing? Want to get connected with us? Have ideas or suggestions? Whether related to lectures or sessions; seminar series or talks, community health screening or movie screenings, our goal is to make this useful site for keeping up with sex and gender issues in medicine. 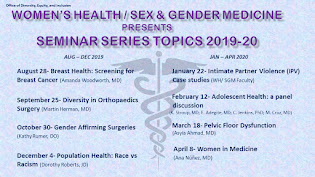